From the Collection September 2019

As part of her Australian Research Council-funding project, Dr Lorinda Cramer has been working within the Grainger Museum costume collection, sharing her skills and expertise regarding all things Australian costume history. We invited Lorinda to provide a summary of her work thus far, to share with our online audience.

I’ve been spending time amongst Percy Grainger’s clothes: hanging racks loaded with his suits, shirts, work clothes and much more. They’re of interest to me for my work on an Australian Research Council-funded project that examines what men’s clothing in twentieth-century Australia might tell us about fashion, masculinity, consumption and social change. Percy Grainger’s white silk shirts, some of which have been adjusted with tucks to shorten the sleeves.

Grainger’s clothes are striking for many reasons. Firstly, he saved a huge range of garments from the ordinary and everyday – including his underwear and pyjamas – to finely tailored performance costumes made by M. B. Guildford of Fifth Avenue, New York, to accessories like bow ties and cuff links. Secondly, he kept his clothes even when they showed signs of damage and wear, repairing them in interesting ways to extend their life. Thirdly, he customised certain items in his wardrobe: many of his white formal shirts, for example, have been shortened in the sleeves through hand-sewn tucks. Fourthly, his handwritten notes the accompany some garments give us surprising detail and insight that we would have no way of knowing otherwise. Lastly, the clothing collection as a whole –and the hundreds of items that Grainger wore – deepen our understanding of his dress across different times, places and contexts.

Together, Grainger’s clothes allow us to build up a dense picture of what one man wore and this is highly unusual in Australian museum collections. When clothing is collected, it is more often women’s – examples of their best dress, designer gowns, and those that reflect fashion’s cycle of change. Men’s clothing, on the other hand, has tended to be neglected. Its aesthetic qualities are not as immediate or appealing and it’s harder to discern changes in style. 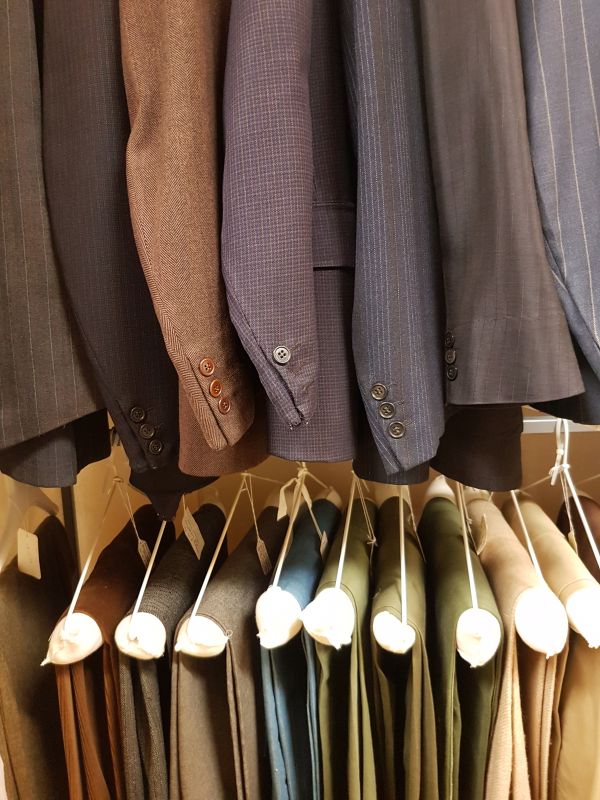 While many of Percy Grainger’s clothes are black or white – including his formal suits and shirts, and his white linen jackets and trousers – he also wore bold colour.

Yet Grainer himself was keenly aware of the appearance he cast and of dressing the part. In 1908 he wrote to his mother Rose about his stay in Melbourne: ‘After a shave & dress up in ultra fine clothes Dr Russell turns up in car for me to pay calls.’[1] The following year in Brisbane, Grainger wrote to Rose about a visit to Government House, noting that he ‘went clad in the combined clothing culture of London & Brisbane!’[2]

His cosmopolitan dress was the result of extensive travelling, though it was also guided by Rose who selected clothes for her son. From London in 1911, Grainger acknowledged:

I look a dream in your divinely chosen clothes. I really am a creation of your taste & wisdom & originality. I am a walking testimonial to your personality. Without you I could not possibly be still so healthy & undecayed as I am & therefore not so gynstig [sic gunstig. Danish: favourable] a clothes prop.[3]

These ‘divinely chosen clothes’ now have much to offer the researcher, and I, for one, am delighted that Grainger had the foresight to assemble his clothing for the Grainger Museum collection.