From The Collection July 2018

Nellie Melba and Percy Grainger performed together only twice, both times in the context of fund-raising for the WWI War Effort in America. Both Grainger and Melba were deeply committed to using their talents for this cause. Exploring this relationship, Curator Heather Gaunt found another Australian fund-raising connection with Melba singing Grainger’s Colonial Song.

Composed as a gift for his mother, Rose, Colonial Song (1911-1914) was written to express Percy’s ‘personal feelings about my own country (Australia) and people, and also to voice a certain kind of emotion that seems to me not untypical of native-born Colonials in general’. Its patriotic flavour contributed to the audience’s delight when Nellie Melba got up from her seat in the audience at a WWI Red Cross fundraiser in Melbourne in 1917, unannounced, and began singing the song. Grainger’s press agent, Antonia Sawyer, wrote up the event as follows:

“If the democratizing of the world is to be the great fundamental achievement of the war one of the most significant by-products is going to be the democratizing of art. Red Cross concerts and the atmosphere they engender have had much to do with promoting this development, and it was a Red Cross concert in Melbourne the other evening that brought forth another illustration of how whole-heartedly the great Australian queen of song, Nellie Melba, has entered into the democratic spirit of art.

It is best to quote the Australian Musical News in its report of [an] unexpected item on the program: ‘An air of mystery surrounded the final number on the program, announced as a “Colonial Song” by Percy Grainger, with Frank St. Leger set down as its performer. Seemingly it was to be a solo for piano; and it was developing quite interestingly on those lines when of a sudden a voice took up the theme. C.S. Calverley somewhere speaks of a wondrous, invisible hand touching the zither…: and here we had in truth a wondrous voice, proceeding from-? But it was impossible to remain long in doubt; such sounds could come from no throat save one: and the diva, still occupying her seat in the rice-regal reserve, poured forth a welling stream of glorious melody. The effect was electric, and enthusiasm knew no bounds. After a little persuasion Mme. Melba consented to accept the demonstration as an invitation for another song and very graciously complied.”’ 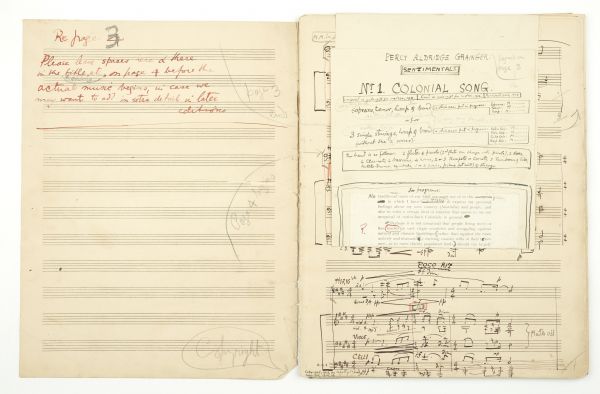