Say hello to Arthur, future Astronaut and Remote Helicopter Flying Electrician Who Goes Out on the Electrical Wires, who is possibly this week's youngest visitor to the Grainger Museum.

Arthur is four years old and lives in France. He speaks (profusely) fluent French and English, and travels regularly to Australia. While on this side of the planet, he visits family and friends, who conveniently live a stone's throw from the Grainger Museum and who persuaded him to visit. In Melbourne, Arthur enjoys collecting gumnuts. He has, over time, developed an appreciation for clothing with ample gumnut-carrying capacity as it facilitates some exciting show-and-tell sessions when the moment arises.

During his travels he has concisely documented the prevalence and myriad varieties of seat-back personal entertainment systems on modern jet airliners. He listened with mild horror as I described to him the days of single fuzzy overhead television screens and stethoscope-style aeroplane headphones, and in return he shared a few cautionary tales of inadvertent headphone socket mix-ups. Like Grainger before him, Arthur is no stranger to the challenges of the travelling lifestyle.

Arthur's favourite exhibit was the pair of beaded native North American gauntlets in The Accidental Futurist exhibition. We speculated that his gumnut collection might be put to use producing similar decorative beadwork, and he seemed quite enthused by the idea. Having a very keen eye for decorative arts, and a well-developed capacity for critical analysis, I would not be surprised to find Arthur wearing some of his own creations on his next visit to the Grainger. 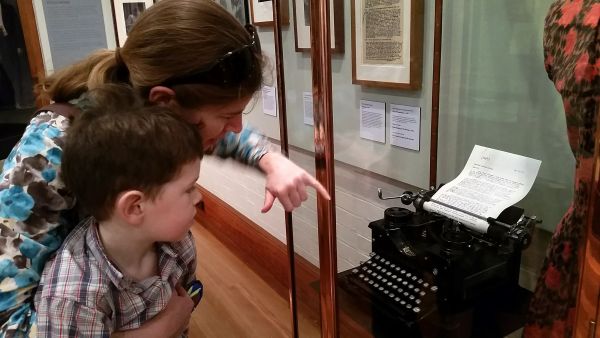 Arthur was also fascinated by Grainger's typewriter in The Accidental Futurist exhibition, which he at first thought was some kind of piano. Once we explained its purpose and gave him a quick Youtube introduction to this strange contraption, he was quick to observe the lack of both a zero and a number one button, and to notice that they could easily be replaced with the letters I and O.

He is presently heading home to coax his grandfather into getting out his old typewriter from the attic. I may have overheard him muttering something about converting it into a spacecraft guidance mechanism as he trotted out the front door...