This month’s Visitor Profile features Christopher, whom we met when he came in to see our Objects of Fame: Nellie Melba & Percy Grainger exhibition. 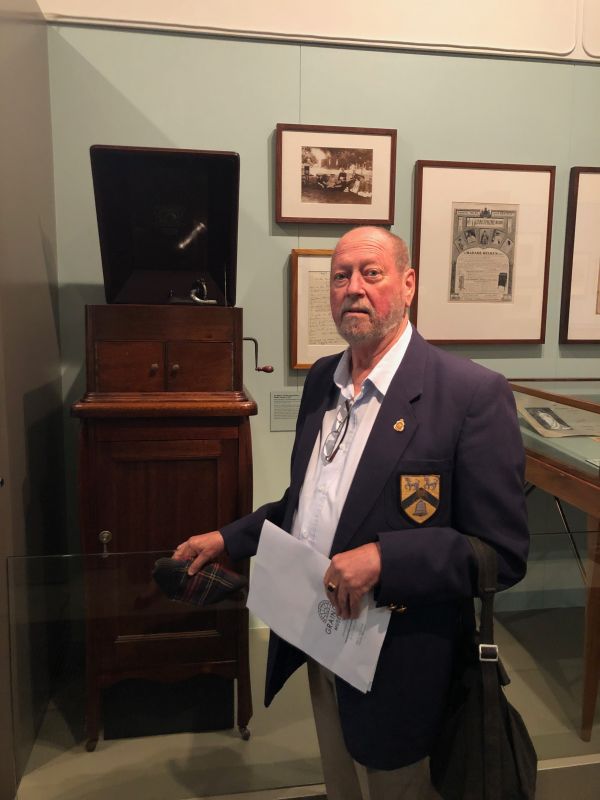 What brought you to the Grainger Museum today?

I live near Bendigo, and decided to come to Melbourne to see this exhibition, after reading about it. Because of my enjoyment of opera, I have a particular appreciation of Nellie Melba. I know that Percy was Melba’s piano accompanist, and of the connection between their families.

Is there a particular object from the exhibition that resonates with you?

I actually donated this gramophone to the Australian Performing Arts Collection back in the 1980s. It is a 1924 edition of the Melba model. It was made for the Great British Exhibition in London in 1924. It has a number four exhibition head, and a triple spring motor. It is a table model, that was made by Alcock & Son in Sydney. This type of model enabled the functional section of the gramophone to be lifted off from the bottom storage section of the unit and transported.

The gramophone originally belonged to my great Grandmother. In 1927 she purchased two matching gramophones (and their bases) from the Alcock & Son catalogue. She was a musical lady, who with her husband put on gramophone concerts. Most of the records in those days were single-sided. By having two machines, she could have one set up and ready to go for when the other machine was coming to the end of the record. This was preferable over stopping the music in order to rewind the machine.

Many thanks to Christopher for sharing his story with us.