From the Collection November 2018

A public research query about the Mona McBurney Collection, held in the Grainger Museum, turned up a fascinating experiment in keeping time for Grainger Curator Heather Gaunt. 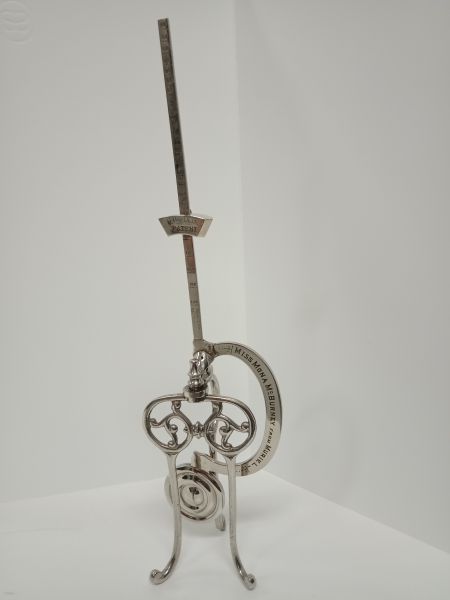 This remarkable timekeeper was brought to light in the process of sourcing material for a public research query from The Mona McBurney Collection, in the Grainger Museum Archive. Accessioned as part of a donation made in 1985 by the family of musician Mona McBurney, the metronome had not been photographed or fully documented by the Museum to date. Once the 3 separate metal parts – arm and legs – were fitted together correctly, in a delicate balance, the object revealed its true nature… a silent oscillating timekeeper. Further research revealed some interesting facts.

Patented in the USA on 31 March 1891, the ‘Improved Metronome’ was designed in England by Arthur Gough Pinfold. Pinfold described his unusual creation in the patent in the following way:

‘The object of the present invention is to provide a simple, cheap, efficient, noiseless, and readily portable metronome or instrument capable of being adjusted so as to oscillate any required number of times per minute, and which may be employed for indicating or marking different times in music, or for rating and adjusting horological instruments, such as watches, chronometers.... The improved metronome has no springs, weights, escapement, wheels, or other parts which can get out of order, and it is always ready for use, as it can be placed and made to operate upon a shelf or other convenient projection, or even upon the finger, or a special stand may be provided to support same, the whole being capable of being inclosed (sic) in a suitable case and carried about the person.’ 1

The Pinfold metronome in the Grainger Museum Collection was given to the composer Mona McBurney by a female friend, who had the instrument inscribed to Mona. Mona McBurney was a significant figure in Australian music history, being the first female to graduate from a Bachelor of Music in Australia, in 1896, and the first woman to compose an opera in Australia. Her opera, ‘The Dalmation’, composed in 1905, used a libretto adapted from a popular novel by F. Marion Crawford, Marietta: A Maid of Venice.2 As scholar Louise Jenkins has observed, ‘The opera stands as proof of the benefits that can be reaped when society provides equal encouragement, support and opportunity for men and women in their musical endeavours’.3