From the Collection February 2019

Innovations in percussion explored
at the Grainger Museum Store.

In the process of research for the forthcoming exhibition at the Grainger Museum focusing on innovations in tuned percussion, Grainger Museum Curator Dr Heather Gaunt and marimba expert Jon Drews have been learning more about a particularly unusual metallophone in the collection of the Grainger Museum, which has been boxed and unplayed for many decades…

Percy Grainger was an innovator in democratizing the performance of music. He wrote in 1916:

‘As a democratic Australian, also as a lover of the natural and the universal, I long to see everyone somewhat of a musician… Therefore, I long to write for the amateur to help to build up a ‘home music’, a ‘room-music’... I turn willingly to instruments (such as guitar, mandolin, whistling, singing, percussion instruments such as the marimba-phone, bells, Nabimbas) that amateurs can readily learn; instruments that encourage artistic pleasure in performances rather than yearly labors of preparation for finally joy-poor performances. To me, music is not only, not chiefly, in how it sounds, but almost equally in how it plays.’

Grainger’s exploration of what he called ‘tuneful’ percussion was a long-term passion (his ‘marimba-worship’1), one that connected him to the most innovative instrument makers of his time and resulted in compositions that dramatically expanded the use of tuned percussion in ensembles and orchestras.  Grainger used tuned percussion instruments such as metallophones, bells, marimbas, xylophones, celeste and piano in his compositions to deliberately change the overall sound and clarity of the orchestra.  The Grainger Museum holds a number of innovative percussion instruments acquired by Percy Grainger, many made to his own designs, by instruments makers including J.C. Deagan (Chicago), Hawkes and Son (London) and R.H. Mayland and Son (New York). Grainger provided J.C. Deagan with hand-drawn design specifications for a set of Staff Bells, for example, which featured in Grainger’s new musical suite for percussion and orchestra In a Nutshell, premiered in 1916.

In the process of research for the forthcoming exhibition at the Grainger Museum, How it plays: percussive innovators, Curator Heather Gaunt and marimba expert Jon Drews have been learning more about a particularly unusual metallophone in the collection of the Grainger Museum, which has been boxed and unplayed for many decades.

This metallophone has over 20 bronze keys (including spares), each fitted below with a hollow bronze resonator. The beautiful embossing on each resonator, in Japonisme style, is a remarkable and beautiful feature of the instrument. 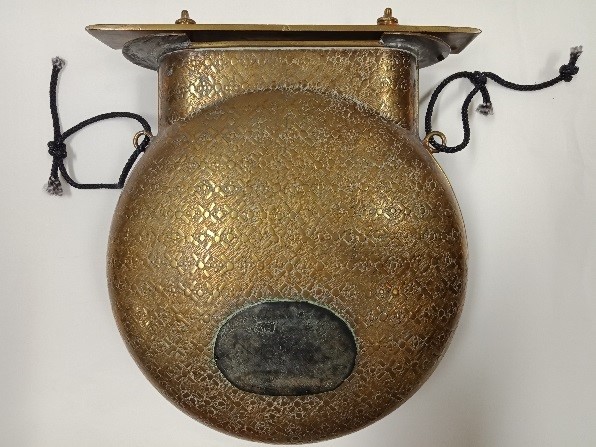 The instrument was put together from elements constructed by a number of different makers, including Besson & Co. (London) who made the frame, and R. Plant & E. Perry who made the keys and resonators. On closer examination of the instrument, we found a US Patent Number (375,833), which started us on a research trail into the innovative design aspects of the resonators. Plant and Perry’s patent (which we found online via Google Patents) describes an ‘Appliance for Augmenting the Sound of the Notes of a Harmonicon or of a Gong’, and relates to ‘the construction, combination, or arrangement of parts forming a resonant chamber with a free vibrating metallic plate or bar applied thereto, the object of the said chamber being the producing, increasing, or modifying of musical sounds, the same being applicable to musical purposes in part, and also to bells or gongs and other analogous purposes.’

Plant and Perry patented their design in 1884 in the UK, and 1888 in the USA.2 Through this research, we realised that our instrument was created in a very early period of experimentation in tuned percussion, in which innovators were pushing the boundaries of instrument design in Western Music, drawing on inspiration (both visual and acoustic) from other cultures. Percy Grainger was just a small child when this metallophone was invented, but as an adult he would be at the centre of the revolution to utilise new sounds that instruments such as this could make, in orchestral and ensemble settings.