From the Collection April 2018

Carl Temple explores a little known link with Kaiser Wilhelm II discovered in the Laver Collection within the Grainger Archive.

“My dear Herr Professor” are the opening words of a letter from the Kaiser Wilhelm II to the William Laver, former Ormond Professor of Music at the University of Melbourne on the eve of World War 2. Laver, 79 himself, wrote to the Kaiser then in Dutch exile, wishing him the best for his 80th birthday and recalling with pleasure his formative years at the Hoch Conservatory in Frankfurt am Maine and the enduring impact of German culture and society. The Kaiser’s grateful reply came with signed photograph as a keepsake. 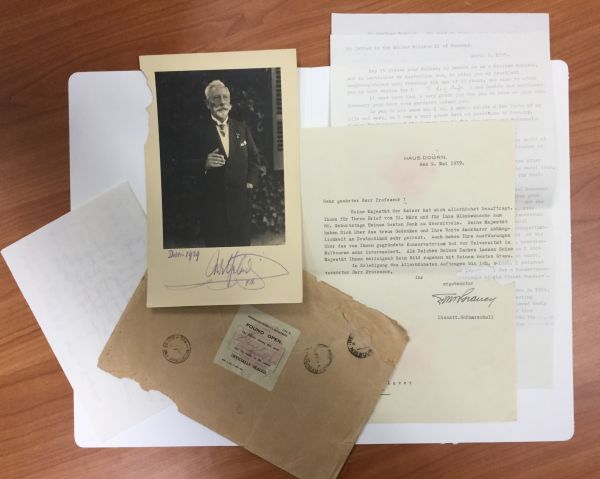 Laver’s original letter to the Kaiser was not retained at the time and when he received the reply the envelope had post office markings indicating it had been opened. By this time, World War 2 must have been imminent or perhaps already underway and Laver was sufficiently concerned that he hastily reconstructed a copy of his original letter for the record. In this he set out his many German connections with a brief biography. The copy indicates he hesitated about wishing the Kaiser a long life, which shows some belated recognition of the fact that Germany had just effectively invaded the rump of Czechoslovakia after previously hiving off the Sudetenland in 1938 (Hitler: “Absolutely the last territorial demand”) and was already making a lot of noise about the Polish Corridor! Both the Kaiser and Laver would be dead within a year.

The Laver collection (Collection number: 2017/26), is just one of a number of small collections of personal papers in the Grainger Museum Archives relating to figures in the Australian music scene in the 20th Century. Laver’s papers document both the history of the University of Melbourne Conservatorium, which he founded on the European models, and his many professional contacts with prominent musicians, academics and, well, even the Kaiser. To my mind, this example demonstrates the richness of the archival holdings at the Museum, their diversity and enduring value, which in founding the Museum, is just what Percy Grainger intended.

Image: photo of Kaiser Wilhelm II, taken in 1939 in Holland (his exile), with accompanying letter, from the William Laver collection.