From the Collection April 2017 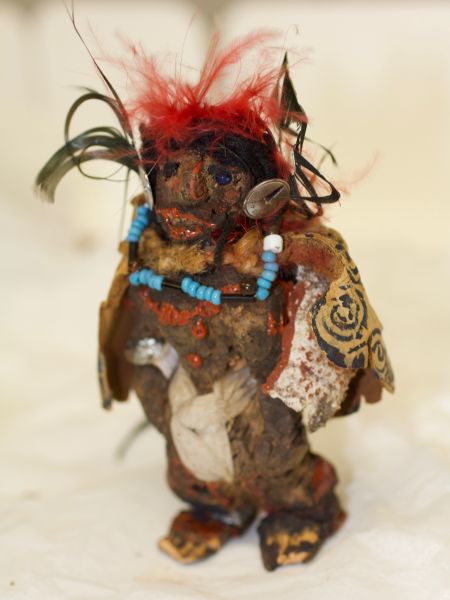 While exploring the Grainger Archive recently with Paul Fletcher, Lecturer in Animation, Film and Television, for objects for his animation students to use as creative stimulation, I came across two amazing figurines which are part of Grainger’s Ethnographic Collection. Paul’s camera was out in a flash. The outlandish figurine (illustrated) was given to Percy Grainger by Danish artist and ethnographer Knud Erik Larsen (1865-1922) in 1907. Possibly constructed by Larsen himself, it is made from an amazing assortment of ‘found’ materials, including stained and painted cork, beads, rag, silver paper, drawing pins, black and red feathers, string, tapa cloth, and painted lobster-shell, the figurine likely represents a character from Norse legend. Grainger, like Paul and I, would have found the object irresistible. In its conglomeration of materials, expressing a rough-hewn intensity and ‘primitive savagery’, the figure seems like the material equivalent of Grainger’s own approach to life and creativity.

Grainger first visited Denmark in 1904, as part of a concert tour of Scandinavia, which, while not a financial success for the emerging international star, was hugely rewarding personally and creatively. Grainger saw his visit as a ‘homecoming’, profoundly connecting his personal psychology of race and his fascination with folk cultures. Grainger had always nurtured a passion for all-things-Scandinavian, including iconic legends such as The Story of Grettir the Strong which he considered as ‘the book that had the greatest influence on my human and artistic life’.

Describing his Nordic fetish, Grainger wrote to girlfriend Karen Holten in 1907 (the year Larsen gave him the Nordic figurines):

‘When in Australia, as a little boy, when I was always thinking and feeling hard about the Anglosaxons & the Old Norse, [the Battle of Hastings 1066 - when the French Normans beat the English Saxons - was the deepest grief of my young years] & such, I used to look long at the map of Denmark, & Friesland, etc & long to be actually on the earth where our race began, (or at least, where one 1st heard of it). And now when I’m in dear Denmark I’m always thinking: “I wonder what men & ships sailed from here to (unconsciously) colonize East England” (& thence America, Canada, S’Africa, Australasia, etc) or I see in a face: “there’s the beginning of a certain English type” … I feel racially towards Denmark how one feels towards the parents of one one loves…'

Grainger spent his Summer holidays with Karen in the northern Danish village of Svinklov, where he met Larsen, donor of the figurines and local resident. As a painter, Larsen worked in a conservative and palatable style, developing a career as a popular portraitist and landscape artist. Grainger acquired a number of artworks by Larsen, including self portraits, which are in the Grainger Museum Collection. It is curious to consider what role our figurines played for Larsen, drawing as they do on wilder aspects of Nordic culture, far beyond the world of society portraiture. These figurines feel like they could be a precursors to troll dolls, which emerged as a cultural phenomenon in the late 1950s and still remain popular today. 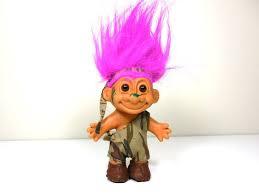